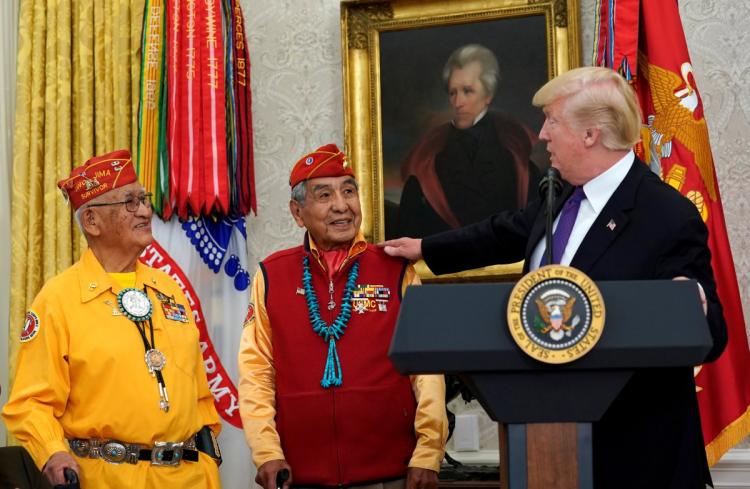 Of all the outrageous bullshit we have been subjected to in the past year, the abject disassociation from the truth, the lies, and fabrications; yesterday’s Pocahontas comment pushed me over the edge.

Siding with the KKK, the pussy grabbing moment, the Russians, the daily endless lies…

Sean Spicer and the soon to be former press secretary Sarah Huckabee standing there selling his toxicity like anyone, even the dumbest bastard in his base is buying even one word.

His “tax reform” that is criminal at best.

His words thrown out and then forgotten regarding the opiate plague that will kill 60,000 this year and 70,000 next year, are empty and deadly.

The “now is not the time” to discuss gun legislation – the day after the biggest mass killing in recent history.

Of all the outrageous kafkaesque insanity we have watched in horror since January 21st, looking at the face of that one Navajo code talker yesterday as that delusional idiot touched his shoulder – in front of a portrait of Andrew Jackson for the love of God – someone slowly explain the Trail of Tears to this moron.

That moment broke me.

Yesterday I was – for the first time – totally and forever embarrassed to be an American. I’m an old, allegedly Christian, white American man.

To those incredibly brave and patriotic men, who risked everything for a nation that actually tried to annihilate them, their people and their culture. Men who put their lives on the line. They didn’t stay home with sore feets. To those brave men I apologize.

I am sorry for the idiot you had to endure.

The look on the one code talkers face as trump spewed his ignorance broke me.

Sir, we are not trump. We don’t know what the fuck that is, but it is not who we are. You fought for a good and noble cause. How it came to this is beyond my ability to understand.

People speak daily about how we keep lowering the bar. Yesterday has got to be the end. The bottom.

We can’t lower the bar any further.