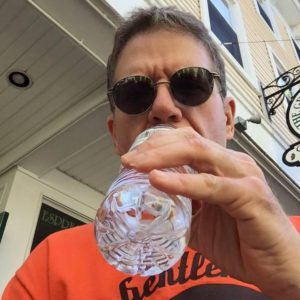 It was 1957, March actually.  Guys who’d kicked Hitler’s and Hirohito’s asses were back home and settling in, buying big block Chevy’s and houses and TVs. I came to this world in the middle of all this. It was amazing. Captain Kangaroo and Leave it to Beaver. There was a sense that we were on the side of God and right.

Then it all changed, quickly. Vietnam, hippies. Nixon. The Russians. We no longer so scary, our government was, and everything started to change. My belief system broke down.  I started to swim with the sharks, the water got deeper and colder.

I got lost as I lost the desire to be found. I began to live underground. I liked it there. I’d be lying if I said otherwise.

Today, no two people know me as the same person. Everyone has a slightly different story, a different version. I’m okay with that. I’m a good source of amusing stories. That is what I should be.

A landlocked pirate, trying to survive 21st century mediocrity, writing is an attempt at making peace with these times and my life. Some days it works; some days it doesn’t.